On May 20, 2022, the China Chamber of Commerce to the EU (CCCEU) held its annual general assembly in Brussels in a hybrid format, which approved the chamber's budget, financial, and work reports, as well as a chamber chapter change.

Mr. Peng Gang, Minister of Economic and Commercial Affairs of the Chinese Mission to the EU, and Mr. Zhou Chunlin, second-level inspector of China's Ministry of Commerce's Department of Outward Investment and Economic Cooperation, have been invited to speak at the assembly, which is being presided over by CCCEU Chairman Mr. Xu Haifeng.

The assembly, which was attended by the chamber's member companies and member chambers from across Europe, unanimously approved the chamber's financial report for 2021, a budget plan for this year, and a chapter revision allowing the chamber to have council members in addition to its current governance structure. Mr. Guo Xin, Secretary-General of the CCCEU, presented all the reports.

Minister Peng Gang expressed his pleasure at meeting with business representatives in person. He said that the scope of Sino-EU cooperation is expanding, and new opportunities in areas such as climate change, digital transformation, infrastructure, and connectivity are emerging, with significant future potential, thanking Chinese enterprises in Europe for their contributions to promoting China-EU economic and trade cooperation. 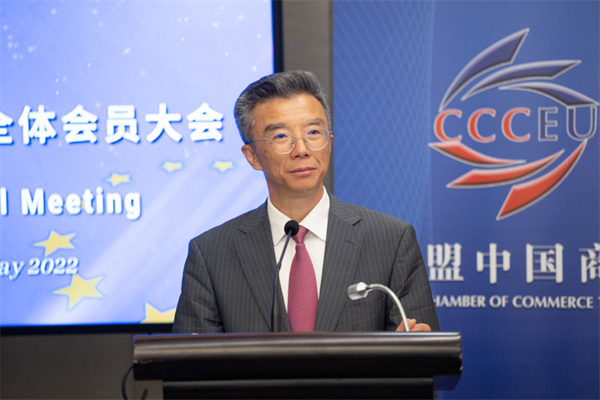 Minister Peng outlined four goals for the chamber's work: first, to be more proactive, to strengthen communication with all sectors, and to continually increase the chamber's participation and visibility; second, to continue to study the EU's economic and trade policies, to actively speak out on behalf of businesses, and to solve the problems that businesses and their members face; third, to strengthen collaboration and contact with national business associations; fourth, to continue to improve the internal operation mechanism and pursue long-term growth.

Through video link, Mr. Zhou Chunlin congratulated the CCCEU on its 2022 annual general meeting. He stated that the chamber has continued to unite its members in the past year to promote China-EU economic and trade cooperation. 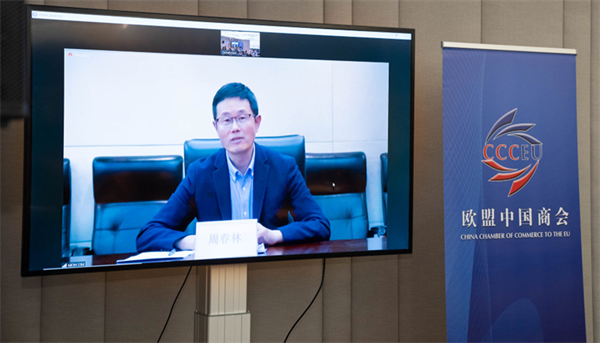 He made three recommendations for the chamber's future development: first, to strengthen its own structure, improve its professionalism and ability to defend rights, and transform the chamber into a family for Chinese enterprises in the EU; second, to create a positive and strong voice through its brand products, continue to play to its unique advantages, innovate its working mode and work path, and provide better services for Chinese enterprises in Europe; third, to prioritise compliance operations, strengthen risk prevention, regulate member enterprises to effectively address various risks, and fulfil its social responsibility.

Mr. Xu Haifeng thanked the Ministry of Commerce and other ministries and departments, the Chinese Mission to the EU and the Economic and Commercial Office, as well as other Chamber members, for their continued support and interest in the Chamber's activities.

He said Chinese businesses in Europe support the chamber's efforts to make significant progress and boost the strengthening of China-EU economic and trade relations. The chamber is dedicated to safeguarding the rights and interests of Chinese enterprises in Europe and improving the EU's business environment, holding more than 30 events to meet the needs of its members.

He added that the chamber has issued its annual flagship study on the development of Chinese firms in the EU over the past three years, documenting their growth and changes in the EU business environment while also making constructive recommendations. 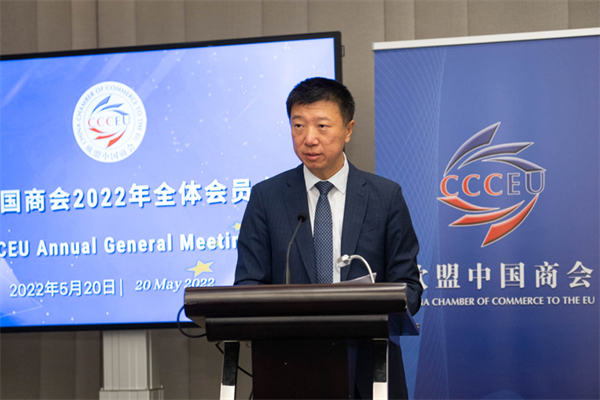 According to Xu, the chamber has enhanced connections with key EU institutions in order to better reflect the voices and demands of Chinese businesses; since last year, the chamber has attracted a number of Chinese enterprises and business associations. Building working groups, enhancing the chamber's governance structure, continuing to participate in the EU legislative process, and protecting the interests of Chinese firms in the EU are all priorities for the chamber.

Five representatives of the CCCEU members spoke about their companies' performance and what they expected from the chamber's work. Ms. Hu Weinian, a Research Fellow in the Foreign Policy unit at CEPS, delivered a lecture titled "Insights from Europe-China Economic and Trade Negotiations." Ms. Hu Weinian delivered a lecture at the gathering. [Photo/CCCEU]

About 120 executives or representatives from the CCCEU’s members participated in the assembly.