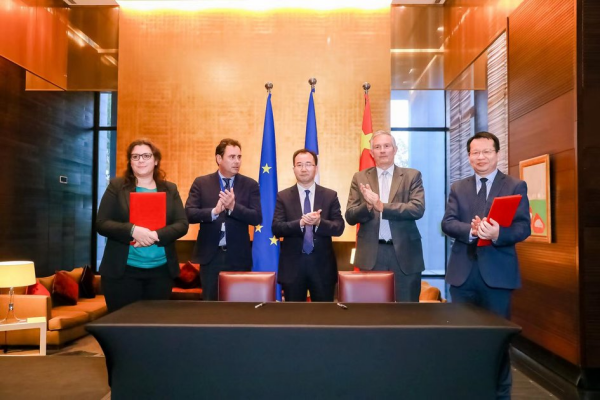 Editor's Note: The Chinese business community urges Europe to provide an open and non-discriminatory environment for Chinese investors after the German authorities reportedly blocked two takeovers. Plus, all eyes are on the upcoming G20 summit, when EU and Chinese leaders may meet in person. The CCCEU Weekly Update keeps you posted on China-EU dynamics. Enjoy reading and have a lovely weekend.

It was utterly upsetting for the business community to witness the flip-flopping of the German authorities in just a few days. The German Federal Ministry for Economic Affairs and Climate Action, according to German company Elmos, indicated that it would approve the takeover by Silex, a Chinese company's Swedish subsidiary, after ten months of review.

The German Federal Cabinet, however, prohibited the acquisition "immediately before the end of the review period," citing "national security" concerns. The decision was made without granting Silex and Elmos the required hearing, according to Elmos.

The dramatic U-turn laid bare the discriminatory treatment towards non-EU companies and could violate the lawful rights of involved parties. It not only largely undermines the credibility of the relevant German authorities but also pours cold water on foreign investors' perceptions of EU investment and business environments.

Apart from the Elmos-Silex case, Berlin was reported to have blocked investment in Bavaria-based ERS Electronic. ERS Electronic said there was no plans to sell the company but it had been exploring the option of getting investment from a Chinese private equity firm.

Chinese President Xi Jinping will meet with his French counterpart Emmanuel Macron and U.S. counterpart Joe Biden and attend the G20 summit in Bali, Indonesia, and the APEC summit in Thailand next week, China's foreign ministry said on Friday.

Xi will as well meet with Senegalese President Macky Sall, Argentine President Alberto Fernandez, among others, according to the Ministry. It remains to be seen whether the Chinese president will meet with President Michel of the European Council in person.

On Friday, China announced the relaxation of some of its COVID-19 restrictions, including shortening the quarantine period for international arrivals from seven days down to five, followed by three days of isolation at home, and scrapping snap closures of flight routes.

A day earlier, the Standing Committee of the Political Bureau of the Communist Party of China (CPC) Central Committee met to hear a report on COVID-19 response, discuss and arrange 20 measures to further optimise epidemic prevention and control work. Xinhua has the story.

MEPs also adopted CSRD, which requires all large companies in the EU to disclose data on the impact of their activities on people and the planet and any sustainability risks they are exposed to. EU member states are scheduled to approve it on November 28 as well.

According to Xinhua, Europe could face a shortage of as much as 30 billion cubic meters (bcm) of natural gas during the key summer period for refilling its gas storage sites in 2023, the International Energy Agency (IEA) warned on Thursday.

According to The Brussels Times, the European Commission has proposed an aid package worth €18 billion for Ukraine to be paid out over the course of 2023.

In a press release published on Wednesday, the Commission called the support package "unprecedented", and claimed that it would "help cover a significant part of Ukraine's short-term funding needs for 2023," currently estimated to be around €3 to €4 billion.

A signing ceremony of the EU-China Biodiversity Fund Grant Framework Agreement is held at the residence of the French Ambassador to China in Beijing on November 4. China firmly supports the multilateral governance system for biodiversity.

Mr. Josep Borrell, High Representative of the EU for Foreign Affairs and Security Policy, has said in an article that "For the EU, China remains, simultaneously, a key economic partner, an overall competitor, and a systemic rival...We have to manage competition with China across all areas, and at the same time aim for constructive cooperation...in our interest."

In response to a journalist's question on this, Chinese Foreign Ministry spokesperson Zhao Lijian said that China and the EU have "broad converging interests, a long-accumulated foundation for cooperation, and highly complementary strengths for development."

"Maintaining Communication and Reducing Misjudgment to Ensure Stable and Prosperous Sino-German Relations" by Huang Mengmeng, was published by the Chinese Academy of Social Sciences. On November 4, German Chancellor Scholz led a delegation of 12 senior executives from German multinational companies to China. According to the article, Scholz's visit releases positive signals of Sino-German engagement, and in the complex and changing international situation, high-level exchanges between China and Germany will lead the way to ensure that bilateral relations will not yaw.

"Germany's Energy Policy Adjustment in the Context of the Ukraine Crisis: Trends and Prospects" is a report released by the Center for Strategic and Security Studies of Tsinghua University. The report points out that Germany, as a world industrial power, has always regarded energy strategy as the lifeblood of its national development. Due to its relative lack of energy, Germany attaches particular importance to the security of energy supply and has been exploring the path of energy development. However, since the escalation of the Ukraine crisis, Germany has experienced a shortage of supply and soaring prices, highlighting the complexity and long-term nature of its energy transition. This report focuses on the adjustment of Germany's energy policy in the context of the Ukraine crisis, and provides an outlook on its future.