China-EU economic and trade cooperation inspires high expectations, 70% of respondents are confident about the industry development upon CAI 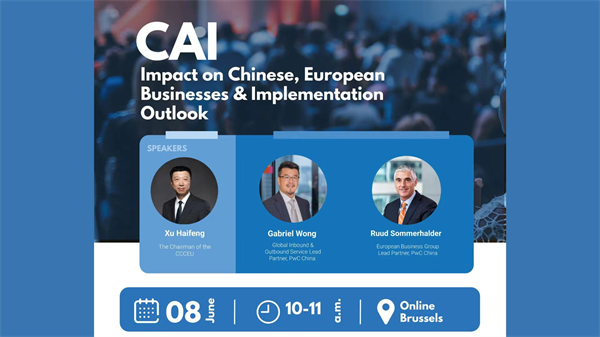 Brussels, 8 June 2022- On Wednesday, the China Chamber of Commerce to the European Union (CCCEU) and PwC China jointly hosted a webinar. PwC China released a report on the China-EU Comprehensive Agreement on Investment (CAI), based on a survey of more than 500 Chinese and European enterprises in China conducted in cooperation with the China Council for the Promotion of International Trade (CCPIT).

Findings showed that 70% of the respondents are confident and looking forward to industry development after the CAI comes into force. Among them, 74% of Chinese enterprises and 67% of EU enterprises in China believed that the CAI will benefit the development of manufacturing, pharmaceutical and new energy sectors. 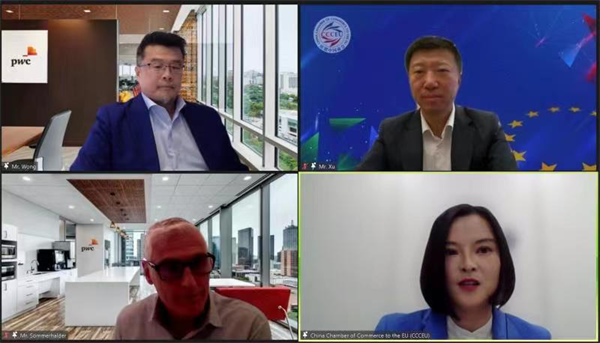 China and the EU's economic and trade relationship has shown to be resilient and dynamic. In 2021, bilateral trade between China and the EU surpassed $820 billion, a new high. In terms of goods, China continues to be the EU's largest trading partner, while the EU is China's second largest trading partner. China and the EU have invested a total of more than 270 billion dollars in each other. Finance, vaccine R&D, new energy, electric vehicles, and logistics are just a few of the areas where active investment cooperation exists. Chinese investment in the EU, in particular, continued to rise at a counter-trend rate in 2021, with a year-on-year growth rate of 13.4 percent. 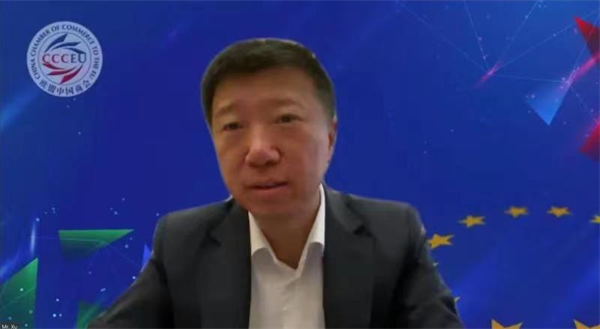 According to Eurostat, the EU's exports to China reached 55.9 billion euros in the first quarter of this year, up 2.4 percent from the same period last year; its imports from China reached 147.7 billion euros, a stunning growth rate of 40.8 percent. The Chairman of the CCCEU Mr. Xu Haifeng said, “Despite the challenges, trade between China and the EU has been impressive. While China and the EU trade over 2 billion euros each day on average, we see a huge potential for bilateral investment.” 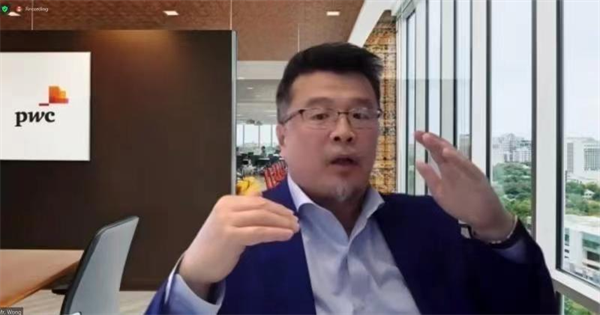 Gabriel Wong, PwC China Inbound/Outbound Lead Partner stated, “China and Europe have a long and important history as trade and investment partners and despite the uncertainty surrounding the world economic recovery, China-EU economic and trade cooperation has shown strong resilience. Looking ahead, China-EU economic and trade cooperation is on track to enjoy a broader prospect of stable advancement.”

In December 2020, China and the EU announced the completion of the CAI negotiations. In 2021, PwC China was engaged by the CCPIT to carry out a thematic survey on the deal. A total of 512 Chinese and EU companies in China responded in the survey, which examined the status and levels of confidence of Chinese companies in investing in the EU, as well as the expectations of Chinese and EU companies on the implementation of CAI.

According to the survey, the opportunities for bilateral investment outweigh the challenges. Findings showed that 58% of EU companies in China and 46% of Chinese companies surveyed believe that the signing of the CAI will have a positive impact on bilateral investment and that companies will benefit from it. In the long-term, both manufacturing and service sectors are expected to gain from the CAI.

Xu said, the CCCEU welcomed the conclusion of CAI negotiations. Last year, the CCCEU conducted a survey in which it inquired about the expectations of Chinese enterprises in the EU about CAI. The surveyed enterprises expect the agreement to create a fair and optimised environment for bilateral economic and trade cooperation. 77% of the surveyed enterprises think they will benefit from the CAI, and 63% say the agreement will have a positive impact on economic and trade relations between China and the EU. The vast majority of enterprises believe that the CAI will facilitate the convergence of their respective competition regimes and will be more beneficial for EU enterprises in China than vice versa.

Ruud Sommerhalder, European Business Group Lead Partner, PwC China observed, “Overall, enterprises have high expectations for the signing of the CAI, believing that its entry into force will bring new development opportunities for them. If the agreement can be signed and come into force in the foreseeable future, it will provide a more abundant source of power for the in-depth development of China-EU economic and trade cooperation and bring substantial benefits to economic and social development, as well as industrial transformation, in addition to upgrading and the internationalisation of enterprises in China and the EU.”

The European Parliament voted in a motion to freeze the CAI on May 20, 2021, putting the agreement's approval in the EU in limbo.

According to PwC and the CCPIT’s report, 33% of Chinese companies surveyed indicated the freeze would harm their EU investment plans, 37% said they were doubtful, and less than a third stated their EU investment plans would not be affected. One quarter of the EU companies in China who took part in the survey said the freeze would impair their plans to continue investing in China, another quarter said they were unsure, and half said it would have no impact.

Huge potential for Chinese investment in the EU

Based on the current situation and expectations of companies investing in the EU, the scale of Chinese investment in the EU is still relatively small and is mostly concentrated in the manufacturing sector. Looking ahead, 48% of respondents will consider investing in the EU within three years, of which 18% will invest within three years and 30% are assessing opportunities, reflecting the sizable scope for Chinese investment in the EU. The signing and entry into force of a high-level investment agreement is particularly important for further unleashing the potential of investment in Europe.

The report also finds that private enterprises are the major drivers of Chinese investments, accounting for 67% of the surveyed companies that have invested in the EU. Germany, France, and Italy are the three most attractive investment destinations, accounting for 56%, 40% and 31% of Chinese companies with investment plans in the EU respectively. Market expansion and the demand for an upgraded industrial chain are the main drivers for Chinese companies to invest in the EU. Among the Chinese companies that have invested or plan to invest in the EU, 61% said they aim to gain access to the EU market and expand their customer base for existing products or services, while 49% said they hope to upgrade their industrial chain and supply chain through investment.

Findings showed that Chinese companies still face impediments to market entry as well as permissive and technical barriers in their investments in the EU. Of the Chinese companies surveyed that have invested in the EU, 44% said that restrictions on landing and operating were the main problem faced, 39% were affected by market access restrictions, and 25% believed that the host country's laws, regulations, and security reviews were too strict in addition to technical barriers.

Based on the expectations for bilateral economic and trade cooperation, PwC set out five recommendations for Chinese companies to invest in Europe and enhance their international business capabilities.

First, invest more in research and development and put high on the agenda the investment cooperation with the EU in high-tech areas.

Thirdly, foster closer cooperation with local companies in the EU to tap into third-party markets.

Fifthly, get prepared for the early stages of investment, improve transparency and effectively respond to foreign investment reviews of the EU.

The webinar was attended by more than 100 participants including policymakers, business executives, scholars, and journalists from China and Europe.

The English executive summary of the survey can be found here.