On December 7 in Brussels via video link, the China Chamber of Commerce to the EU (CCCEU) and the EU-China Business Association (EUCBA) co-hosted the second exclusive year-end dialogue between Ambassador Zhang Ming, head of the Chinese Mission to the EU, and business leaders. 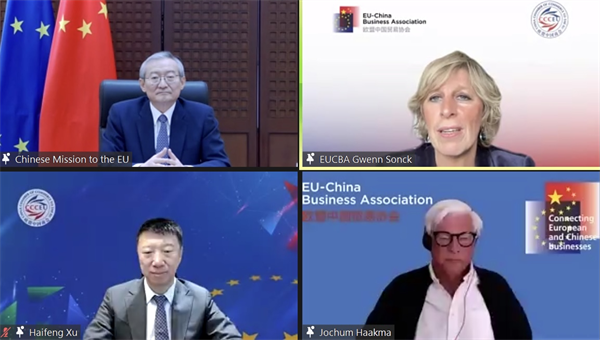 Speakers at the exclusive dialogue between Ambassador Zhang Ming, head of Chinese Mission to the EU, and business leaders, in 2021.  Photo by the CCCEU.

Ambassador Zhang reflected on this year’s Sino-EU economic and trade relations before fielding questions from the audience. The EUCBA Chairman Jochum Haakma and the CCCEU Chairman Xu Haifeng gave welcome remarks at the event moderated by Gwenn Sonck, the EUCBA executive director.

In his keynote speech, Ambassador Zhang said that despite the pandemic, China-EU economic and trade cooperation has increased against the trend, with China-EU trade volume in the first ten months of this year already surpassing overall trade volume last year, demonstrating strong resilience.

On the other hand, Sino-European ties have had ups and downs this year, the ambassador said, referring to the EU’s unilateral sanctions in March, which soured bilateral relations, and the European Parliament’s “freezing” of the painstakingly negotiated China-EU investment agreement. He also talked of Brussels’ recent expansion of its trade toolkit, which has raised concerns among the business community, noting that the overall ranking of Chinese enterprises in the EU on the bloc’s business environment has fallen for the second year in a row, according to the CCCEU’s flagship report. 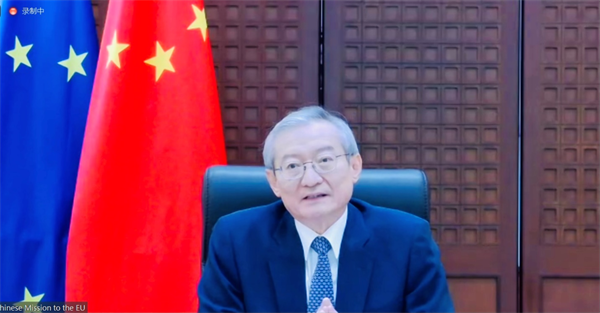 Ambassador Zhang Ming, head of the Chinese Mission to the EU, delivered a keynote speech. Photo by the CCCEU.

Ambassador Zhang stressed the importance of bilateral cooperation. "After nearly two years of the epidemic, we are more aware than ever of the significance of a community of a shared future for mankind, as well as openness, cooperation, multilateralism, dialogue and consultation. We must 'pull together' rather than 'loosen our grip', 'tear down walls and build bridges' rather than 'build walls and destroy bridges'."

The ambassador also expressed his optimism about the prospects for economic and trade cooperation between China and the EU, urging the two sides to seek common ground while shelving differences.

After his speech, ambassador Zhang responded to the questions related to the China-EU investment deal, the EU’s strategic autonomy, Global Gateway, Brussels’ renewal of sanctions, the German new government, France’s rotating presidency of the Council of the EU, Chinese economic outlook, and so forth.

On the China-EU investment agreement, Ambassador Zhang said that the agreement should return to its essence, which concerns economic and trade cooperation. “The accord is not a panacea. If someone insists on using it to resolve differences between China and the EU in various fields, their intention is not to solve problems, but to create them, with the goal of breaking the camel's back. Holding the ratification hostage and turning economic relations into a plaything for political interests would be irresponsible.”

He reaffirmed China's support for the EU's “strategic autonomy,” which he believes is consistent with the EU's global power positioning. In terms of the EU-US ties, he stated that China does not intervene in transatlantic relations and has never resisted the expansion of dialogue and cooperation between Brussels and Washington. Changes in EU-US relations should not affect China-EU relations, let alone at the expense of relations with China.

Concerning Germany’s incoming “traffic light” coalition, which is likely to adopt a tougher stance on China, Ambassador Zhang told the audience that a “break-in period” is common when a new administration takes office, but cooperation and mutual benefit, as the mainstream and essence of Sino-European relations, “would not change from one moment to the next.”

About a week ago, the European Commission unveiled the "Global Gateway" strategy, which is widely believed to be designed to counter the influence of the China-proposed Belt and Road Initiative (BRI). Ambassador Zhang commented on it, saying that the BRI, the "Global Gateway," and Washington's "Build Back Better World" all boil down to the same idea of fulfilling international duties and assisting in the achievement of the 2030 SDGs. “Different initiatives should take into account the strengths of each other and work together to bridge the infrastructure gap in developing countries,” he noted. 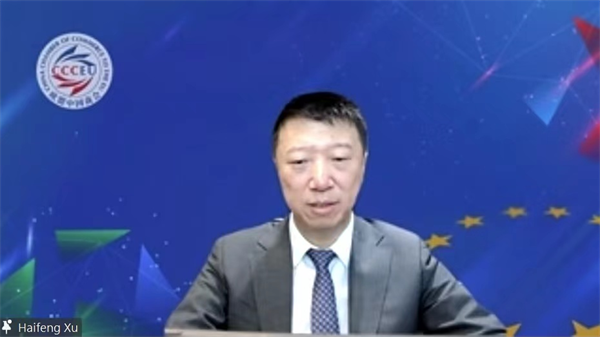 Mr. Xu Haifeng, chairman of the CCCEU, delivered a welcome speech. Photo by the CCCEU.

In his welcome speech, Mr. Xu said that the year-end dialogue between the ambassador and business leaders would help foster bilateral exchanges. He also went over the key takeaways from the CCCEU's flagship report for 2021. 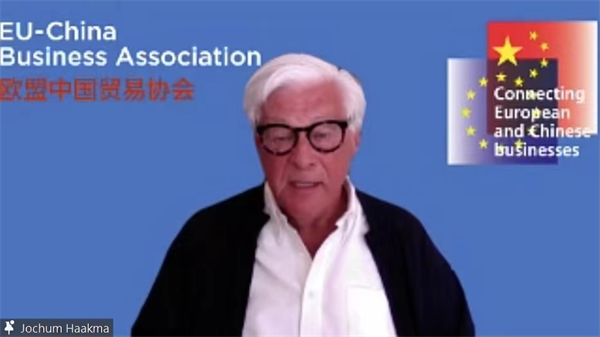 Mr. Haakma said that European companies remain firmly committed to the Chinese market, which he thinks has great untapped growth potential. He called for the EU-China investment agreement to be ratified soon as it “offers an opportunity to increase investments as well as trade.”

More than one hundred executives and representatives from Chinese and European businesses attended the event.

On December 10, 2020, the CCCEU and the EUCBA co-hosted the first exclusive year-end dialogue between Ambassador Zhang and business leaders.