Experts have called for more collaboration between the EU and China on financial markets to help price harmful emissions out of existence. /Reuters

Cooperation was the main area of discussion at a forum of Chinese and European financial leaders on Thursday, where they debated ways to fight climate change through sustainable finance.

Europe and China have both set ambitious climate targets for the coming decades, and acknowledge that collaboration will be necessary to reach those goals.
"A robust partnership between China and the EU will help translate our complementary leverages in the green economy into a promising future," said Bank of China President Liu Jin. "In cooperation on the green economy, the financial sector will undoubtedly play an important role."

Speaking at the China-EU Green Economic Cooperation Summit, Liu outlined three main ways the financial sector could be utilized to tackle climate change. He said more funding should go to sectors that contribute to low-carbon transition, such as clean energy and new low-carbon technologies. 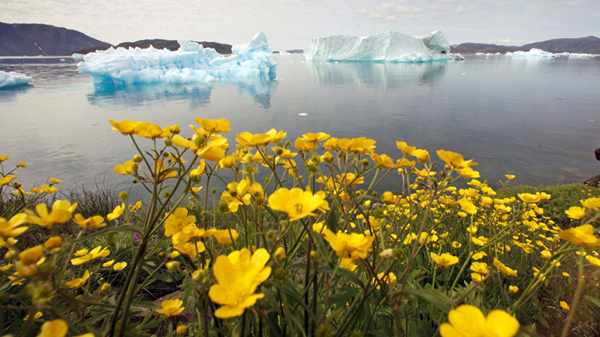 The appearance of wildflowers in Greenland near the polar cap is the latest sign of global warming, something both nations are looking to address. /Reuters

China has already invested trillions towards this effort as it aims to reach a carbon peak by 2030 and carbon neutrality by 2060. Europe is also investing heavily in its green transition, with a third of its $890 billion COVID-19 recovery fund earmarked for green initiatives.
"The pandemic has worked as a catalyst for the green and sustainable transition. And we are now encouraged in Europe to build forward better," said Pierre Gramegna, the finance minister of Luxembourg.
Some experts called for more connectivity between China and Europe's carbon markets, which address climate change by putting a price on the harmful emission, often helping to redirect resources into cheaper, low-carbon options.

Financial leaders say they believe sustainable finance is a key way to prevent the increase in natural disasters such as forest fires. /Reuters

Europe is a global leader on this front, with the world's first and largest emissions trading system. China has tested several pilot programs and is now trying to get a national scheme off the ground. Once it launches, it will be one of the largest in the world. This provides an opportunity for collaboration and a sharing of expertise.
Liu said the EU and China could also team up to set the global standard for green governance and financing. On Tuesday, the European Commission proposed a new European Green Bond Standard to funnel money into climate-friendly projects as it strives to hit net zero emissions.
Green bonds are exploding and are now a trillion-dollar market. But at only 2 to 4 percent of total bond issuance, there is a lot of room left to grow. Establishing a "gold standard" for companies to raise funds could help avoid "greenwashing" – when companies or projects claim to be greener than they are in reality.