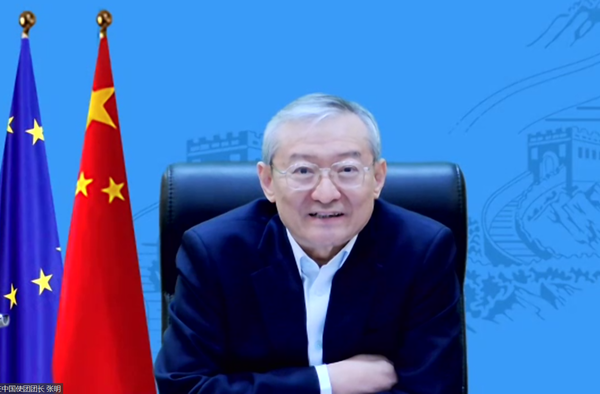 On March 30, Ambassador Zhang Ming, Head of the Chinese Mission to the EU, attended the 2021 annual general assembly of China Chamber of Commerce to the EU (CCCEU) and delivered a keynote speech.

Ambassador Zhang said, the weather in Brussels in early spring, a mixture of sunny and rainy days, somewhat resembles the state of play of the China-EU relations. Last week, the EU imposed unilateral sanctions on the relevant Chinese individuals and entity on the grounds of the so-called “human rights issues” in Xinjiang, which has exerted extremely negative impact on the bilateral relations. China strongly opposes the sanctions and took prompt and resolute countermeasures.

Ambassador Zhang pointed out that since China and the EU established diplomatic ties in 1975, bilateral relations have managed to reach the heights today despite twists and turns along the way, just as dangerous shoals and reefs cannot stop rivers from running to the sea. As two major forces, markets and civilizations in the world, China and the EU must cooperate. That’s the only way to achieve win-win development.

Ambassador Zhang emphasized that economic and trade cooperation is an important part of China-EU relations, and Chinese enterprises in Europe are the major driving forces of the cooperation. Under the current circumstances, it is important to press ahead against the headwinds and contribute to the maintenance and growth of China-EU cooperation. Ambassador Zhang asked CCCEU to reach out to various sectors in the EU, protect the legal rights and interests of its members, and strive to provide quality services for them. He also asked the members to give more support to CCCEU’s work and help it achieve faster and better development.

Minister of the Economic and Commercial Office of Chinese Mission to the EU Xia Xiang, Deputy Director-General of MOFCOM Department of Outward Investment and Economic Cooperation Liu Mingqiang, and more than 120 representatives from Chinese enterprises, commerce chambers and associations in Europe participated in the general assembly.