On March 30, 2021, the China Chamber of Commerce to the EU (CCCEU) held its 2021 annual general assembly via video conference, which gave the green light to the appointment of the Chamber’s new chairperson as well as budget and work reports.

Attended by the Chamber’s 60 out of its nearly 70 member companies and member chambers that cover some 1000 Chinese enterprises across the EU, the assembly unanimously approved Mr. Xu Haifeng, who leads the Bank of China (Luxembourg) S.A., as chairman of the CCCEU, succeeding Ms. Zhou Lihong who retired earlier this year.

Members also reached a consensus on the Chamber’s financial report for 2020 and a budget plan for this year, both presented by Mr. Guo Xin, the Secretary-General of the CCCEU. Mr. Xu Haifeng, the CCCEU Chairman, presented the report on the work of the CCCEU at the 2021 assembly. [Photo/the CCCEU]

Speaking highly of the contribution of Ms. Zhou, vice-chairpersons, and members, Mr. Xu delivered the Chamber’s work report, summing up progress over the past year and laying out the roadmap for 2021.

He pledged that the Chamber will work to strengthen its research and policy advocacy to represent the interests of its members, respond to EU institutions, put forward policy suggestions, and make the voice of Chinese enterprises heard to improve their business environment.

Ambassador Zhang Ming, head of the Chinese Mission to the EU, addressed the assembly’s closing section of the assembly. [Photo/the CCCEU]

At the close of the meeting, Ambassador Zhang Ming, head of the Chinese Mission to the EU, and Mr. Liu Minqiang, Deputy Director General of the Department of Outward Investment and Economic Cooperation of China’s Ministry of Commerce, delivered congratulatory messages. Minister of the Economic and Commercial Affairs of the Chinese Mission Mr. Xia Xiang attended the closing section of the assembly.

In his remarks, Ambassador Zhang said China-EU cooperation has flourished since diplomatic ties were set up 46 years ago, but it does not come without difficulties or bumps.

Only through cooperation can China and Europe win together, he noted, urging joint efforts of the Chamber and its members to further bolster China-EU economic and trade relations. 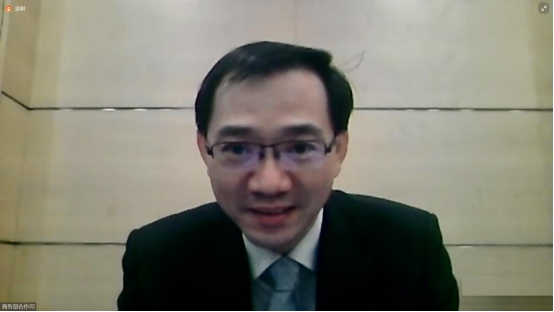 On behalf of the Department of Outward Investment and Economic Cooperation of China’s Ministry of Commerce, Mr. Liu lauded the Chamber’s role as a bridge for China-EU cooperation and its significance in promoting bilateral economic and trade relations.

He urged the Chamber to better serve Chinese companies in Europe and to strive for a more favorable business environment in the EU.

A dozen representatives of the CCCEU members exchanged views on how their companies performed last year and their expectations of the Chamber’s further development.

The assembly was also informed of Ms. Zhou’s retirement as chairwoman and a board member, effective in January this year, and the resignation of Mr. Fu Jing, senior information and network officer and a board member.

About 120 executives or representatives from the CCCEU’s members participated in the online assembly.