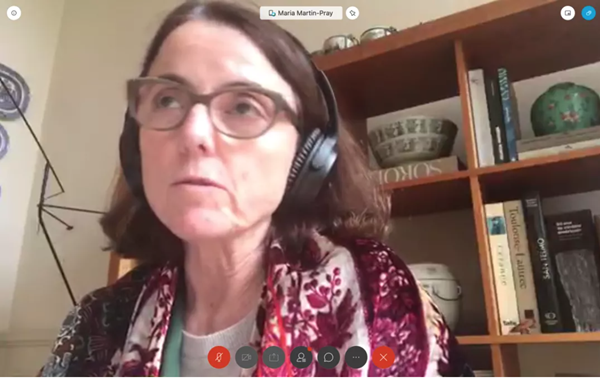 Maria Martin-Prat, director in the DG Trade of the European Commission and the EU's chief negotiator for CAI, was talking at the virtual civil society dialogue. Source: the CCCEU.

The China Chamber of Commerce to the European Union (CCCEU) took part in the civil society dialogue on the EU-China Comprehensive Agreement on Investment (CAI), held by the Directorate General for Trade (DG Trade) of the European Commission via videoconference on January 27.

Maria Martin-Prat, director in charge of Asia, services and digital trade, investment, and intellectual property at the DG Trade of the European Commission, presented the outcome of the 7-year-long EU-China investment negotiations wrapped up on December 30, 2020.

Martin-Prat, who also led the EU's negotiations with China on the CAI, said the agreement in principle came following the EU-China summit in 2019 during which both EU and Chinese leaders agreed to speed up the talks, targeting to get the accord by the end of 2020.

The audience were briefed on the major elements of the CAI, namely market access, a level playing field, and sustainable development. On January 22, the DG Trade of the European Commission unveiled all but the full text of the CAI, with annexes on the schedules of market access offers due out in February.

As for the next steps on the EU side, Martin-Prat said the CAI text is currently under "legal scrubbing" and will be translated into all EU official languages, the procedures that could take 6 to 8 months. Martin-Prat expected that the European Parliament and the Council will approve the CAI by the end of this year "unless there are other delays."

Within two years after signing the CAI, the EU and China will aim to complete the negotiations on investment protection and investment dispute settlement, she said.

"The member states are behind these," she said, adding that Brussels and European capitals will as well work closely at the implementation stage of the CAI.

The civil society dialogue on CAI was attended by some 150 representatives from the EU and member states' relevant associations and organizations in business, agriculture, chemicals, financial services, renewable energy, and others. On behalf of its members, the CCCEU participated for the first time in the civil society dialogue organized by the DG Trade of the European Commission.