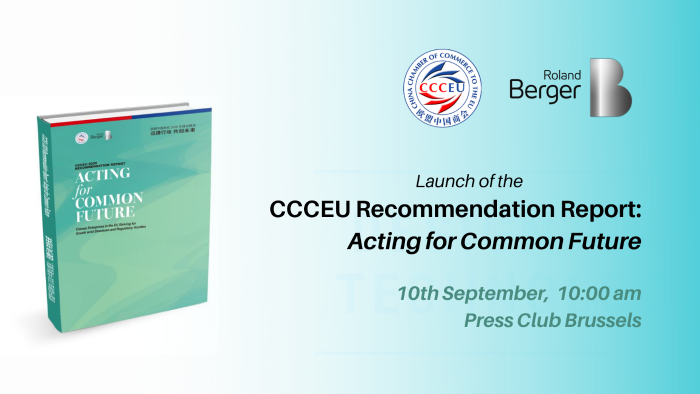 BRUSSELS, SEPTEMBER 10 -- The China Chamber of Commerce to the EU (CCCEU) on Thursday called on the EU and member states to address Chinese businesses' deep concerns on issues such as 5G and tighter screening measures, following a survey which showed Chinese companies in Europe had slightly less-favorable views on the bloc's ease of doing business.

The CCCEU and Roland Berger jointly launched the 2020 Recommendation Report titled "Acting for Common Future: Chinese Enterprises in the EU Striving for Growth amid Slowdown and Regulatory Hurdles," which involved four months of in-depth interviews and surveys of Chinese companies operating across Europe. The CCCEU and Roland Berger jointly launch the 2020 Recommendation Report on September 10. CCCEU Chairwoman Zhou Lihong delivers a keynote speech and answer questions from the journalists. (Provided by CCCEU)

CCCEU Chairwoman Zhou Lihong told the launch event that as COVID-19 wreaks havoc on EU economies, most of the Chinese member companies and institutions in the bloc have been struggling to weather the pandemic storm.

Adding to their woes is that Brussels and several member states continue to adopt a "conservative" approach to foreign investment, security screening and foreign subsidies, among others, leading to "unprecedented" uncertainties for Chinese companies and causing major concerns, she noted.

The report finds, overall, that Chinese companies in the EU have a slightly less favorable view regarding the ease of doing business in the bloc, with the total score dropping from 73 points in 2019 to 70 points. Close to 60% of survey participants cited "a slight decline", and 10% "a significant decline" when asked to assess the overall environment of doing business.

"We present eight recommendations for the EU and member states, and hope they pay close attention to the voice of Chinese companies and take action to provide a more consistent and predictable macro-policy framework for the development of Chinese companies in Europe," said Zhou.

"It is our hope that this report will help bring us closer and meet each other half way; and in doing that, help the EU and China do their part to revive the global economy in the challenging circumstances in which we find ourselves," said Denis Depoux, Global Managing Director at Roland Berger, in a statement.

He added that a new economic cycle is possibly starting, driven by the transformation of the Chinese economy into a domestic consumption and services-driven economy, measured by the quality of its growth rather than mere GDP figures. This means that European companies will increasingly produce in China for the Chinese market, while Chinese companies will seek more added value in their production and sales, along with growth abroad, to offset slower domestic growth. Working with European companies will help bring the innovation and know-how needed, as well as develop overseas presence, he said.