The China Chamber of Commerce to the EU (CCCEU) held its flagship "China-Europe Business Dialogue" in Brussels on Wednesday with the theme "Building Stronger Economic Partnership & Tapping into EU Digital Transformation".

The CCCEU believes there is an urgent need for businesses, governments, the broader public and the media to have a frank and consistent dialogue on burning issues to maximize the benefits of digital technologies for humankind.

The CCCEU invited three keynote speakers, Romano Prodi, former president of the European Commission and two-time former prime minister of Italy, Vice President of the European Parliament Dimitrios Papadimoulis, and Ambassador Zhang Ming, head of the Chinese Mission to the EU, to deliver speeches via video conference and deliberate on the broader picture of the Sino-EU relationship at this critical juncture in history. The section was hosted by CCCEU Chairwoman Zhou Lihong. 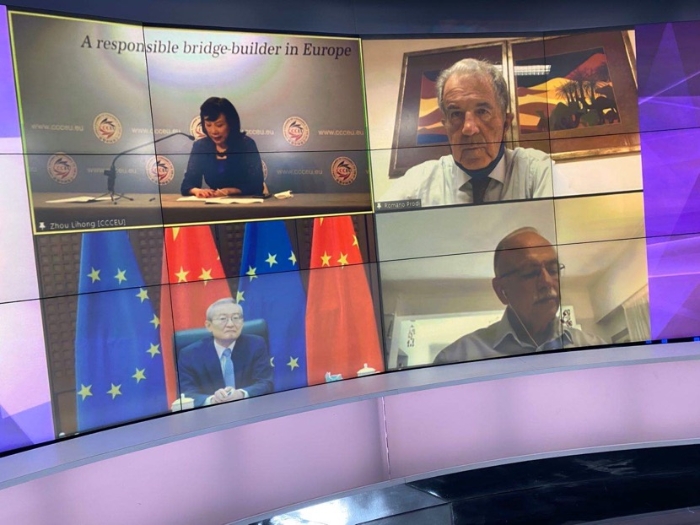 "Cooperation between China and the EU is very much necessary now as global competition will change after Covid-19," said Prodi. "Globalisation will not end, but will change. We must set the rules now, with a common approach and step by step."

"It is crucial to avoid 'systemic rivalry' in the digital sector," Papadimoulis pointed out. "We have to intensify our efforts to further enhance cooperation. I fully agree with the Chinese Chamber that a regulatory framework on security and fair competition is absolutely necessary."

Ambassador Zhang said China and the EU have a common language on openness. He expressed the hope that the two work together and be open to each other's market. In the digital sector, "we need to establish an open, fair and nondiscriminatory business environment for everyone to benefit from the digital economy".

During the event, Zhou also announced the formation of a Digital Working Group which aims to help Chinese businesses in the digital sector forge closer partnerships in the EU.

She added that the CCCEU will, together with Roland Berger, launch its 2020 Recommendation Report for EU institutions on Thursday, which presents Chinese businesses' latest sentiment on the ease of doing business in the EU, their five key concerns and focuses, as well as eight policy proposals to Brussels to improve the bloc's business environment and enhance China-EU trade and investment ties.